We have 513 guests and no members online 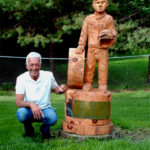 Ron Mancini was born in Detroit, Mi in 1939. He first became interested in Drag Racing by competing in local drag races at Motor City and Detroit Dragways from 1963 through 1966. During this time frame, Ron hired into Chrysler in 1963 as a Transmission Tech, Automatic, Manual, and Clutches groups, and later transferred to MoTech as an instructor in Drive trains.
In 1966, he was encouraged by his Uncle Dan Mancini, one of the key members of the fabled Dodge Drag Racing Team, The Ramchargers, to pursue racing in the NHRA Super/Stock division. Ron’s beginning venture into this realm of Drag Racing was with an aluminum front end 1963 426 Max Wedge Plymouth, which he first began campaigning in 1967 at an NHRA World Championship Series Points race at National Trail Raceway, Columbus, OH. Ron won that event, his first major race, and then went on to win the 1967 NHRA Division Three Super/Stock Season Championship. Also in 1967, Ron competed in his first ever NHRA National Event, the NHRA SpringNationals at Bristol, TN. In his first National event appearance, he garnered the Runner-up spot in Super/Stock to the legendary Ronnie Sox of Sox & Martin fame. In addition, Ron set both the SS/BA and SS/CA NHRA National class records with the ’63 Plymouth in 1967. 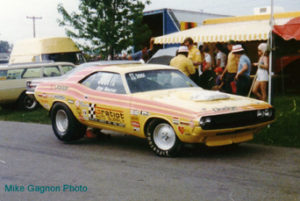 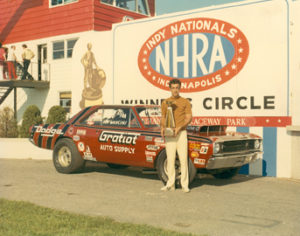 After this, Ron walked away from the sport until 1990 when he decided to try his luck at competing in the National Muscle Car Association events. He got right back to his winning ways by capturing the 1990 NMCA Super/Stock championship. For 1991, Ron stepped up to the Pro-Nostalgia category, setting the class record that year. In competing in the finals at Memphis, TN in 1991, his engine blew causing a big engine fire. Ron decided he had tempted fate before, and called it a career.