We have 148 guests and no members online

John Grivins raced a series of Ford Stock Eliminator cars during 1958, 1959 and 1960 at Midwestern drag strips like Stanton, Michigan and Osceola, Indiana. Bitten by the drag racing bug and with the access to an ideal location, he decided to build his own drag strip in 1961. He opened US 131 Dragway in 1962 while still attending Western Michigan University. 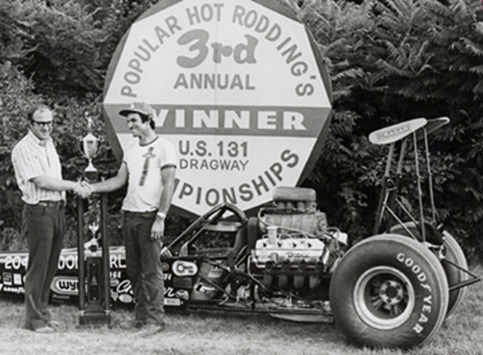 The sport of drag racing had begun a decade before on the West Coast, it had taken a while for it to reach middle America. Simultaneously, a new expressway was being built that connected Grand Rapids and Kalamazoo, Michigan. The new road was built through open farm country approximately a mile west of the previous two-lane road. The new roadway created some unusual parcels of leftover land when it was completed. One such parcel was a 198-acre property with more than a mile of frontage on the new highway. Although it was conveniently located near the Martin, Michigan exit, the large parcel was long and narrow by a farmer's standards.
To a young John Grivins however, the layout appeared to be perfect for a drag strip. John, along with his father Voldamer, started working on his track in 1961. It opened, mid-1962. John was the youngest track operator in the country.
From the beginning, the track was a family affair. His mother, Martha, ran the concession stand while his brother, Gunnar, helped out in a variety of roles.