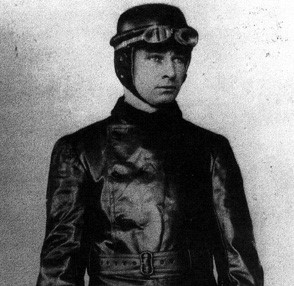 (1884 - 1916)
Inducted into the Michigan Motor Sports Hall of Fame in 1983.
When most people think of the early days of auto racing, they automatically think of the Barney Oldfield name. However, if you really want to take the time to investigate the factual information available, you would come up with an entirely different name, that of Bob Burman.
Born in Imlay City, Michigan on April 23, 1884 and later moving to Jackson, Bob became an employee of the Jackson Automobile Company. At the tender age of 17 he won his first race, a local 5 mile match race. In 1906, his employer loaned him a car, which he entered and won a 50-mile race in Detroit.
Next was a 24 hour endurance race at St. Louis, MO. Teaming up with Ernest Kelly, Burman not only won, but beat the competition by 82 miles, driving 22-1/2 hours himself.
Burman's star was rising rapidly and now the Buick Company signed him as a salaried factory driver. Bob won the first race he was entered in, under the Buick colors, the 187-mile Garden City Sweepstakes on Long Island.
February 1909 found him winning the 100-mile Mardi Gras Festival event in New Orleans with a record time of 1:42:39.4. In July at Columbus, Ohio, Bob bettered the mark with a 1:41:00 clock¬ing for the 100 miles.
The Indianapolis Motor Speedway was opened on August 1921, 1909 with a series of races held. Burman won the inaugural race, the 250-mile Presto-O-Lite Trophy dash, beating out Louis Chev¬rolet. In his first full season with AAA, Bob finished 4th with 1,000 championship points among 70 drivers.
1910 at Indianapolis, Burman won the Speedway Helmet in a 10-mile sprint, which paid him a $50 weekly salary as long as he held it. In July he returned to Indianapolis and romped off with the G&J Trophy race, beating Louis Chevrolet. The following day Bob set a record of 1:23:43, to win the Remy Grand Brassard trophy in a 100-mile race. Burman's year was closed out by adding the 20 & 50-mile beach records of Jacksonville, Florida along with one-hour record of 81.65 miles.
On his 27th birthday, April 23, 1911, Burman celebrated by smashing the one-mile record at 141:73 MPH breaking the old record, set by Barney Oldfield in the same car by 10 MPH.

A month later, Bob Burman was named "World's Speed King," with a $10,000 crown covered with je¬wels when he broke the track record at the Indianapolis Motor Speedway, with a time of 35.25 seconds (102:127 MPH). On July 4, 1911 at Brighten Beach, N.Y., a track near Coney Island, a crowd of 15,000 watched Burman set a new world dirt track record of 48.72 seconds.
Bad luck seemed to dog Burman in 1912. Running in 2nd place at the Indianapolis 500 on the 153rd lap, his car blew two rear tires simultan¬eously and flipped, putting him in the hospital for a week. Labor Day found Bob back at Brighten Beach, New York breaking the world dirt track re¬cord again at 48.85 seconds. The car was taken to the beach at San Diego, California and on December 26th Bob was clocked at 129 MPH before his car burst into flames and he drove it into the ocean to extinguish the fire.
Burman excelled on the dirt in 1912. Out of 43 races entered, he won 33 and was 2nd 8 times, earning him the "Driver of the Year" award.
On his way to Indianapolis, Bob stopped off at Oklahoma City, when on April 29, 1915 he drove the last 100 miles of a 200 mile race with one broken goggle and a splinter of glass imbedded in his eye, causing him great pain, but still winning the race.
That same year found Burman finishing 6th at the Indy 500, his best finish there.
Bob Burman had had a brilliant career and was still in his prime when on the fateful day of April 8, 1916, running in a race through the streets of Corona, CA his car flipped as he was pushing it to the limit to catch the leader. In his prime at age 32, Bob Burman paid the supreme sacrifice in the sport of auto racing. He gave his greatest possession, his life, for his greatest love, that of racing.