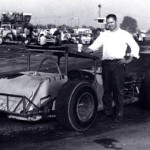 Jack Conely saw his first race early 1957 at Motor City Speedway, Detroit . The racing bug bit him but it wasn’t until he joined the Air Force and was stationed near Champagne , Illinois. He was able to drive. Jack told the owner of a midget he knew how to drive so the fellow took a chance on him. The first time on the track Jack saw everyone else was running low so he went high and passed them to win every race he was in that night. The owner fired him because he never saw the wheels on the ground most of the night. Jack went back the next weekend and got another ride.
When Jack returned to Brighton, Mi after the Air Force, he built his first car and went to the Port Huron track. Since that time he has always driven his own cars and in his own way. Jack started building his own Chevy engines and always took them to and beyond the limit. He has had many speed magazine articles written on his development of 434 cubic inch small block Chevy engines. His engines are in race cars throughout the United States and Canada.

Jack used to run seven nights a week at tracks in Michigan, Ohio, Indiana and Canada in the late 50’s and early 60’s. He has won over 500 feature, held many track records and won many championships at Sandusky, Jackson, Owosso, Spartan, and Toledo Raceway Park. Delaware, Ontario, Canada and others. He bought an Indy car and attempted to qualify with one of his own engines but didn’t make the field. He ran the Oswego, New York Classic from 1960 to early 70’s. With a case of oil in the cockpit of his upright #299 he changed cans on an oil spout during the races because he ran no oil rings on the pistons.
At Jackson he flipped down the backstretch guardrail from second to third turn breaking his right arm. He was back driving the next week in a cast. Over the years that injury caused pain and numbness in the elbow which finally forced him to retire from driving in 1974. The racer’s nicknamed Jack the “Brighton Bandit” because he was always stealing the show wherever he went. It always seemed to be at ease while driving the #27 roadster called the “RAT” with the “Apartment for Rent” sign on the side and oil rags under the pan. when he would be on the track the pits were usually empty because the men enjoyed watching him sail around the ovals.
He was always a crowd pleaser and took time to talk with all his fans. Conely’s Speed Shop is busy all the time as well as his Glen Oaks Singles Bar across from his Dyno Shop. Every year his bar sells more Kiwanis Candy Canes for underprivileged children than anywhere else in Brighton . John Jr. helps in the shop and is driver of a formula car. His daughter lives in Brighton .