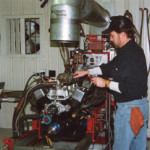 Dan Crawford has been a part of Michigan racing world since the late 1960’s. His life long involvement began at Tri-City Dragway in Freeland. He attended his first stock car race at Dixie Motor Speedway in 1968. He instantly realized that oval track racing was for him. Starting out as a driver/mechanic building his own cars and engines in an era when cars were not cookie cutter out of the box. It was a time when a person needed to be skilled in welding, fabrication, and machining to race and succeed. He drove sportsman for two years and late models for one.
It turned out his engineering skills and his will to succeed were far better than his driving skills. As a crew chief and engine builder he was behind the scenes for many successful drivers locally as well as ASA and the NASCAR Busch Series. Starting, like most, at the bottom, he learned his trade and worked his way through the ranks. His main goal early on was to race in the premier short track racing series ASA. Achieving that goal plus much more was realized. With several opportunities-unities to continue to the next level, he stepped down from the crew chief roll in 1998. His last race as a higher level crew chief was at the end of the 1998 season with ASA veteran Bob Senneker. They won the Milwaukee Mile race for th second time. Forty years later Dan is still deeply involved and still racing. He and his businesses play an important role behind the scenes in Michigan Racing and the automotive world throughout the entire country. 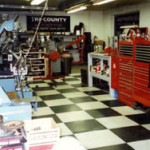 He was the crew chief for Dale Fieshlien in the mid 1990’s and they raced on a limited schedule. Jerry Nadeau tried to lure Crawford to be his crew chief, but by then Dan was disillusioned by the politics of high level racing, and decided to give up big time racing and devote more time to home, a new coating business and local racing.

As an engine builder one of his engines won the Super Comp division at Bristol, TN for the Courbier Brothers Racing Team. Over the years he also been involved with motorcycle road racing, Monster Truck racing, and AMA Flat Track motorcycles. He also designed and sold T-Shirts, jackets, and hats for some of the ASA drivers he was associated with.

Dan designed and built one of the first modern generation engine boring/milling machines in the country. The first one was sold to Bill and Ernie Elliott of NASCAR fame. As an engine builder in th 1980’s and early 1990’s his Tri-County Engines won numerous short track races and championships with many different drivers.