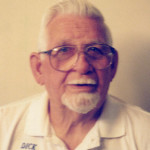 Dick first went to a race at Jackson Motor Speedway in October of 1948 at the age of 15 with Chuck White from Michigan Center. From that day on, Dick said, “I was hooked”.

When Dick was 17, he started with Go-Karts and ran just for fun, he didn’t run for points or championships.  He ran them until he was about 20. Dick started his family in 1953 and sold his Go-Karts, he took off a couple of years from racing. He then started racing boats in 1955 until about 1960; he was a member of Ace Racing Club and American Power Boat Association. He was pitman for Jack McCourtie who won almost every race that season in C-Class Boats. Dick also raced snowmobiles for Dalz Center every winter for about 4 years.  He started racing motorcycles in about 1963, but that didn’t last long!

In 1964 Dick built his first racecar, a 1955 Chevrolet.  He put Joe Collins in the car to start with.  Joe was involved in a bad wreck at Jackson Motor Speedway on that night. Dick took the “ruined” car to Ervens Reo Truck garage and with the help of E.J. Faley, Ed Todd and Carl Rockwell, (who donated a ‘57 Chevrolet). They built another car in 3 days and went back to Jackson for the Tri-State Championship race. Ed Todd drove the car, he qualified 2nd fast, won the dash, pursuit and feature to win the Tri-State Championship in 1964.

Dick and Ed Todd teamed up in the 1965 season and got off to a winning start. They had several feature wins and Ed won the 1965-point championship, beating Glen Stevens by 15 points. Dick then put Glen Stevens in the car and he ran for about 2 years at both Jackson Motor Speedway and Manchester Speedway. Dick built 1965 Chevelle’s with big block engines. He had drivers such as Dick Kathrens, Ralph Donaldson, Darrell Thomas, Gordon VanderBeek, Sonny McHenry and Jim Steman in the black #10 car and many other cars. Dick also built cars for several other drivers, such as Bill Collins, Mel Pruden, Bill Flack, Rev. Ray Lewis and in 1986 Les Housel. Dick also had an auto repair shop at the time and did front end alignments and engine work until about 1973.  Then, he moved to another garage in Michigan Center and started building racecar trailers and utility trailers from which he retired in 1993.


In 1998, Dick decided to build another car.  He put together a Rayburn dirt car and ran it at Butler and Crystal Speedway.  That was the end of his car building.  The drivers were Bill Flack, Mark Steman, Tony Ewald and Earl Miles, Jr..

In October 1995 Dick took over the Jackson Motor Speedway reunion party from Scotty King.  Dick along with his wife, Nita, ran the parties until October 31st 2004. He then turned it over to “Bill” Larry Brown.

He also worked at several tracks as tech person and a line-up person, such as: Michigan Ideal Speedway for Russ Densmore, Crystal Raceway for Dealers Choice for the Beebes, Butler Motor Speedway for Denny Donaldson and Joe Dorer, and Springport Speedway for Paul Zimmerman.

Dick was certified in open wheel modified Inspection through ICAR.  His cars won several championships at different tracks: at Jackson, Butler, Manchester, Avilla, Toledo, Oakshade, Owosso, Auto City, Spartan, Dixie, Hartford and Mt Pleasant.  Dick and his wife, Nita, traveled around with the Hall of Fame mobile trailer for 6 years.  He was been on the Board of Directors for the Michigan Motor Sports Hall of Fame for a number of years.