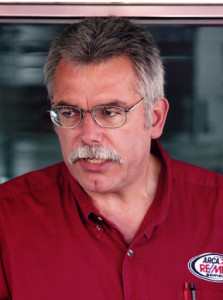 As the grandson of MARC/ARCA founders John and Mildred Marcum, Ron Drager’s life long involvement in stock car auto racing has encompassed nearly every facet of the sport.

Drager’s career began in 1968 at Flat Rock Speedway, where he spent his formidable childhood and teen years selling race programs and souvenirs on race weekends. His duties soon grew to working on the track’s fire/cleanup truck, performing weekday track maintenance, serving as a pit steward, ticket seller, ticket taker and gateman. Over the years, Drager has served in various other capacities at Flat Rock Speedway, including PA announcer, chief scorer, registrar, assistant flagman, public relations/communications director and race director. He has also taken on an active roll in marketing, sales and rules development. In 1981, he was named General Manager and Promoter of the .25-mile Metro Detroit area short track.

In 1982, he graduated with honors from Ferris State University with degrees in Marketing and Journalism. He soon went to work full time for ARCA, first serving as Public Relations Director and assuming the position of Vice President of PR/Media in 1986. As Drager’s involvement in ARCA evolved, so did his association with Flat Rock Speedway, which runs ARCA-sanctioned short track racing on Saturday nights. He became an ownership partner at the track in 1986 and was named “Promoter of the Year” by the Michigan Auto Racing Fan Club in 1986 and 1991.

In 1996, Drager took on the role of President of ARCA and also took on sole ownership of Flat Rock Speedway. He was the 1996 Michigan Speedway Promoters Association (MSPA) Promoter of the Year. In 1997, he earned a RPM Workshops Outstanding Continuing Operation Award on behalf of Flat Rock Speedway.

In 1998, Drager, along with area business man Roy Mott, purchased Toledo Speedway in Ohio and began a capital improvement campaign at the .5-mile facility which has included remodeling and renovations, the addition of skybox suites, a new superspeedway-style pit road and lighting system and a complete resurfacing the track, among other changes.

In 2000, Drager was named President of the Michigan Speedway Promoters Association (MSPA), a coalition representing more than 20 Michigan based speedways dedicated to the betterment and future of racing in Michigan for the promoter, driver, and race fan.

As the President of ARCA, Drager is currently responsible for all activities, obligations and operations of more than 100 ARCA sanctioned races each season including the nationally touring ARCA RE/MAX Series, the regionally touring ARCA Lincoln Welders Truck Series and weekly short track racing at Flat Rock and Toledo Speedways. Under the leadership and direction of Drager, the ARCA RE/MAX Series, which represents the most diverse nationally touring stock car series and the second longest running championship racing series in the country, has experienced record growth, including record car counts and TV audiences.

Drager currently resides in Temperance, Michigan, with his wife Valarie and daughters Lindsey and Leigh.