We have 200 guests and no members online 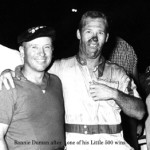 One of the premier sprint and midget racers of the late 1950’s through mid 1960’s and one of the most promising of the early 1960’s championship car drivers was Ronnie Duman of St. Clair Shores, Michigan.
Ronnie was born in Grand Rapids February 12, 1929. His mother died in childbirth and Duman was raised at the St. Francis Home in Detroit. Upon graduation, he joined the service. He was discharged and returned to the Detroit area in 1950, where he went to work for the Ford Motor Company as a test driver at the proving grounds.
In 1951 Ronnie attended a jalopy race as a spectator and was bitten by the bug. Within a month he had built a racer of his own and was racing. He had a miserable showing at first but in a quiet, determined fashion he improved each week until he was winning races on the Michigan-Ohio circuit with regularity.
Ronnie soon felt that he wanted to make racing a way of life and at this early stage of his career set the Indy 500 as his goal. In 1951 he continued to drive his own jalopy and started to drive midgets and roadsters wherever he could.
By the mid ‘50’s Duman was driving strictly for other car owners and was considered one of the smartest and most consistent drivers in the state. In the late fifties Duman amassed a sprint car and midget record that would lead him to his goal of the Indy 500 in the coming decade. 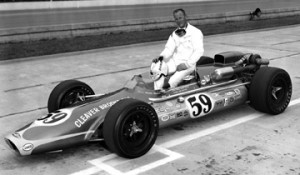 In 1957 Ronnie was leading the Anderson Little 500 by an insurmountable margin when mechanical failures sidelined him. But he came back later in the year to win the Flat Rock 500 for sprint cars. Then, for good measure, he won the very prestigious Anderson Little 500 the next two years. In the same two years he won three 100-lap midget races and by 1961 had a chance for his rookie test at Indy. In 1961 he was also named Rookie of the Year at the Hoosier 100 dirt car race.
Ronnie spent the early sixties trying to get a competitive ride in the Indy cars. In 1964 he got the break he had waited for and made the 500. Unfortunately he was caught in the fiery crash that took the lives of Eddie Sachs, Dave MacDonald, and Ronnie himself was seriously injured.
After recuperating from the Indy crash, Duman resumed racing midgets, sprints and champ cars. In fact, he served notice of his complete recovery by winning the Hut 100 in 1964.
By 1964 the trend to rear engine cars was sweeping champ car racing. Duman was firmly established with the old guard but it took him three more years to land a competitive rear engine ride. In the meantime, he kept the new wave honest with some astonishingly high finishes in uprights and roadsters on the championship trail.
Ronnie Duman died in a racing accident on June 8, 1968 during the Rex Mays Milwaukee Race  (1929 - 1968). He is well remembered and his superb talents are highly regarded by the harshest critics, his fellow competitors.