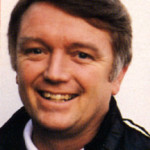 Tom Earhart was an unique racer. Tom (driver) and Big Bob Gaudrèau (owner) and their COORS LIGHT ARCTIC CAT speed sled set three time world record holders in competition in NSSR Events. The team of which was the first to use a Mercury Outboard engine to power a snowmobile competed with an all new concept; twin engine twin track snowmobile. The new COORS LIGHT ARCTIC CAT was powered by two 2.4 EFI Mercury Outboards that will be capable of producing 1,000 horsepower with the use of a custom built NOS Nitrous Oxide Systems. Especially, designed Goodyear twin tracks will be used on the new concept Silver Bullet. The same style track has been used on all of the Gaudreau Earhart Team’s previous record holding snowmobiles. At the final 1986 speed run at the Wild West Winter Carnival in Shoshoni, Wyoming, The COORS LIGHT ARCTIC CAT set a top speed of 159.17 mph in winning this event. The team was expected to be in the winners’ circle during the 1987 NSSR WORLD RECORD SERIES, if the final race of 1986 is any indication of the Gaudreau Earhart COORS LIGHT ARCTIC CAT team’s winning attitude. 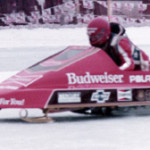 Tom Earhart lives In Middleville Michigan with his wife Linda. They has three children, Travis, Scott, and Carrie who is married to Bob. They have given Earhart his first grandchild, Robert Thomas. Earhart works for Reynolds Metal Company and owns his own business, ERJ Engineering. His wife Linda, and sons Travis and Scott will travel with the team this year as part of the crew. Other members of the crew are Jerry and Lori Landon, Todd Foote, Doug Reames, Gary and Denise James.