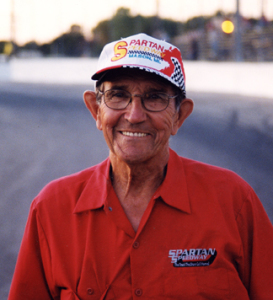 Paul Zimmerman was born in Jackson on May 11, 1924, and resided there until he was 11. He then moved with his family to Aurelius in 1935. He worked on his father's farm after graduating from Mason High School. He also worked numerous second jobs during that period. He took over the farm in 1951 due the untimely death of his father. He added a job at a service station in 1960, but when the owner of the service station died, Paul sold the cows and bought the station.
Paul did all of the maintenance himself. Even at the age of 78, he stilled mowed the grass with the seven Ford Tractors he owns. They represent the farming background that hasn't left Paul. He learned hard work as a farmer, and still maintains the pace today. Some of his friends call him the energizer bunny.
Paul has brought in many traveling groups including USAC, ARCA, AMRA, DARE, Tri-SAC, MARA, IMCA, ICAR, SOD, the Iceman Series, MMA, and NAMARS. He has had many national stars racing at his track including Bobby and Davey Allison, Michael Waltrip, Jeff Finley, and Tim Fedewa.. The 2002 schedule include a visit by Kyle Petty.
Paul was instrumental in the IMCA style modifieds coming to Michigan in 1985, and along with Mike Creed and Owosso Speedway helped form the Michigan Modified Association.
Paul was the 1985 Michigan Auto Racing Fan Club "Promoter of the Year" in 1985.
Paul was the regional "RPM Promoter of the Year" in 1996.
He received an IMCA appreciation award in 1988.
He was the 1997 Michigan Speedway Promoters Association "Promoter of the Year" in 1997, and is currently on the executive board of directors of that organization, as well as a board member of the Michigan Modified Association.
Over the years Paul has held many charitable fun raisers for the local charities, such as American Cancer Society, the Special Olympics and collections for special needs for local residents (children with medical needs and injured drivers).
Paul died on December 20, 2010 at the age of 86  (1924 - 2010).